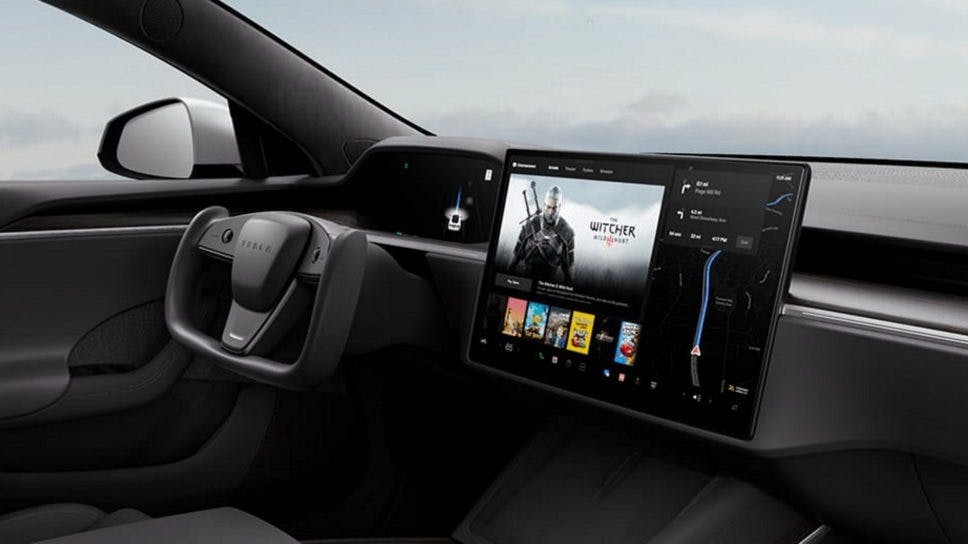 Play 1,000s of video games in your Tesla with Steam integration and support

Elon Musk has finally done it. No, not killed Twitter. He has successfully allowed you to play video games while sitting in a Tesla.

Society has been anxiously awaiting the arrival of self-driving cars. Image napping during a morning commute or playing video games on a long road trip. Tesla has been trying to make this a reality and have most recently added a Steam Deck to one of their car models.
The 2022.44.25.1 holiday update is coming to high-end Tesla vehicles, the Model S and X. Both of these models have 16G of onboard RAM, allowing them to run all of the Valve games that are available on the Steam Deck. There are currently over 6,000 compatible titles, including Cyberpunk, God of War, and Game of the Year winner Elden Ring.
On Twitter, Tesla CEO and troll Elon Musk also added that the gaming experience would be amplified with an "epic sound system."

How to play Steam Deck in the Tesla

Games that are verified for Steam Deck compatibility will now be available to play on some Tesla models' existing central console, which can support up to a 2200x1300 resolution. The integration will support wireless controllers connected with Bluetooth, meaning gamers can even use a mouse and keyboard setup.
This was an idea Elon Musk had for a while now but it took some time since Steam support had to be integrated into the Tesla. Musk asked game developers to add support all the way back in 2018 and now some games will include individual support, including Cuphead, The Witcher III, and Cyberpunk 2077. But since 2018, Musk has switched to general Steam support instead of specific titles.
Previously, video games could be played on Tesla's screen while the car is in motion. This has caused a lot of controversy, including an investigation from the National Highway Safety Administration. For now, Tesla has limited gameplay to when the Tesla is parked.
This means that the idea of playing video games during a road trip is still just a daydream. Of course, this latest Tesla update is one step closer to the idea of playing video games while cars navigate autonomously. But for now, you'll need to keep your eyes on the road and save the gaming for when you pull over.