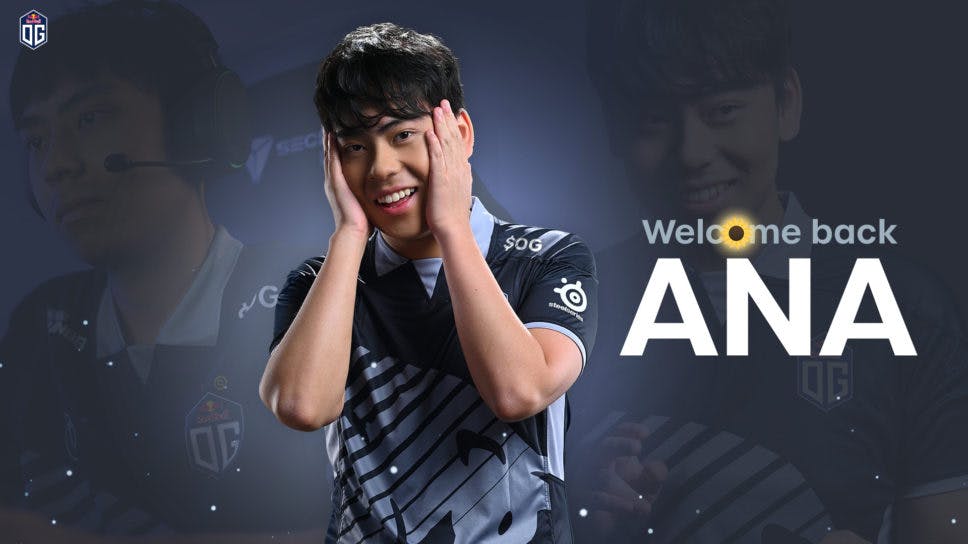 Welcome back Ana! TI winner returns to OG ahead of DPC Season 2

Ana is back. OG is ready for DPC season 2. How much of an impact will Ana have on OG’s performance? Only time will tell.

What do you do when things are going wrong? What do you do when you cannot qualify for the Dota 2 Major? Is there a TI on the horizon?
If you are OG, there is one tried and tested answer. Anathan "ana" Pham.
Dota 2 is nearing the TI season and OG has brought back its favorite prodigy, 21-year-old Ana. After announcing Midone’s departure from the roster following a string of poor results, OG had to make a change. The suspense was unbearable for Dota 2 fans, but there were rumors, memes almost, of a possible Ana comeback. And OG’s Dota 2 roster is now complete and the two-time TI championship team is raring to go.

Is it enough for a three-peat?

“So what can I say… Playing with ana has always been special for me.

It brings back so many memories… So many lanes won… many big fights… So many fun moments… It’s great to have him back and I look forward to seeing what we can do together :)”

Johan “N0tail” Sundstein, Co-owner of OG esports.
OG has struggled in recent months failing to qualify for the Major in DPC Season 1. The team did come close to qualifying, but it came down to a three-way tie between OG, Team Liquid and Tundra Esports. Team Liquid won the tie-breaker securing the only Major spot off the tiebreaker available for the ONE Esports Singapore Major.
Following the disappointing performance, OG parted ways with MidOne. The team announced Ana’s return, which hopefully should help them reach the previous highs.

“Ana is a beast, we all know that. We love playing with him, and we love having him around again. We are really going to try to enjoy this time together and cherish this experience. At the end of the day it is all about playing high level Dota, with great people and enjoying how great it feels.

Sébastien “Ceb” Debs, Co-owner of OG esports.
Ana has been inactive since OG’s TI win apart from a brief stand-in appearance for TNC Predator at the WeSave! Charity Play. OG is currently ranked 27th in the Dota Pro Circuit points after securing just 50 points from DPC season 1. The Dota Pro Circuit Season 2 Upper Division starts on April 13 with eight of the best Dota 2 teams in action. OG will face Brame in its opening match on April 13.
After the upset-filled ONEEsports Singapore Major, Valve recently released the 7.29 gameplay update. The new update brings several gameplay changes along with a new hero, Dawnbreaker. The hero has so far been underwhelming but has potential for some really exciting plays.
Stay tuned to Esports.gg for the latest Dota 2 news and updates. Featured Image Credit: OG esports.