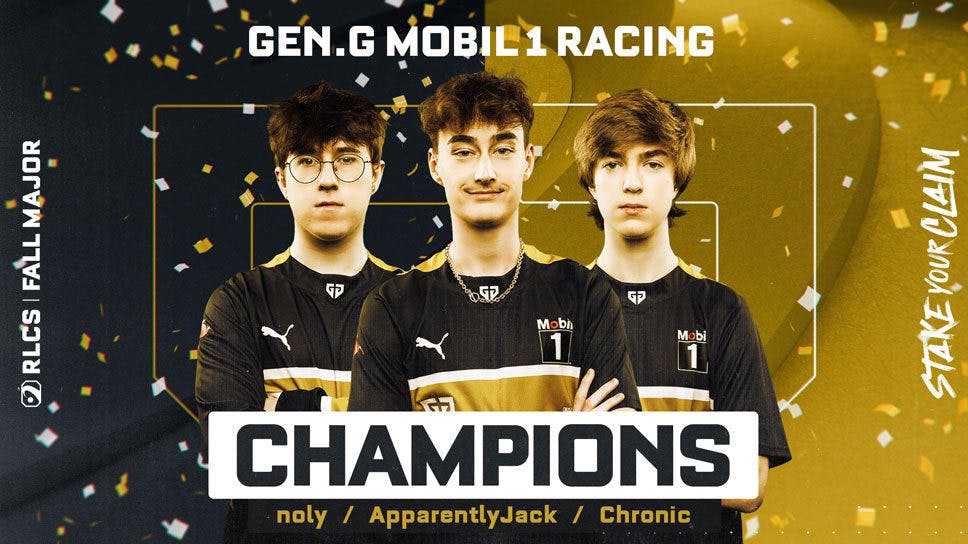 Gen.G Mobil1 Racing is the winner of RLCS Fall Major

Swarovski will design the new RLCS trophies for Rocket League

Rocket League will be working with Swarovski in creating new trophies and medals for the RLCS 2022/23 season.

Gen.G Mobil1 Racing went to the RLCS Fall Major as one of the tournament favorites. The organization is new to the scene with the acquisition of Stormtroopers, which housed experienced players Jack "ApparentlyJack" Benton and Joseph "noly" Kidd. They are joined by the American prodigy Nick "Chronic" Iwanski. With Braxton "Allushin" Lagarec as their coach and Noe "Pollo" C. as their substitute, the team looks intimidating from the start.

The two teams will take part in the Rocket League Championship Series and Women’s Carball Championship.

They started a bit shaky during the qualifiers of the RLCS NA Fall Open. But they found their footing and managed to stay at the top of the race throughout the whole Fall season. They achieved a second-place finish in the Fall Open and Fall Cup. They ended the Fall season with a bang, getting first place for Fall Invitational and cementing their invite to the RLCS Fall Major.

They went into the RLCS Fall Major with clear goals in their mind. Although the line-up looks good on paper, they still have to prove the doubters as they didn't have any LAN experience together as a new team. They won their first round of the Swiss Stage against PWR quite easily with a 3:0 score. Gen.G, unfortunately, stumbled against Oxygen Esports in the second round. They go full reset for the next rounds, earning them third place in the Swiss Stage and allowing them to move forward to the playoffs.

Here are the live results, schedule, and all you need to know about the upcoming Rocket League Championship Series (RLCS) 2022-23 Fall Major.

Going into the playoffs, they went through a challenging series against Team Liquid and barely survived with a 4:3 score. They then went on to face FaZe Clan in the semifinal which they won quite convincingly. Next, they had to go through one last challenge in the form of Moist Esports, a huge tsunami waiting to swipe them off.

Gen.G is the first to lift an RLCS Major trophy

Gen.G Mobil1 Racing went into the series against Moist Esports equipped to combat the blood-thirsty European team. In an intense back-and-forth series, they have decided to clamp down on any Moist Esports' hope to reach Game 7. Gen.G Mobil1 Racing took the Grand Finals with a score of 4:2, crowning themselves as the champion of the RLCS Fall Major. They finally went on stage to lift the beautifully made RLCS Fall Major trophy which is crafted by the jewelry company Swarovski. This is the first time a team will get to lift an RLCS Major trophy.
Here are the RLCS 2022-23 Fall Major MVP winners:
We will keep you updated with more Rocket League Championship Series content, so stay tuned to Esports.