The wait is over, and Fortnite Chapter 4 is finally here. Fortnite’s massive following has anticipated Epic Games’ next move since announcing the Chapter 3 Finale event last month. A few weeks later, the new season arrived with a new map, a fresh loot pool, and much more. Let’s look at Fortnite Chapter 4 Season 1 patch notes and see what has changed.

All locations in Fortnite Chapter 4 Season 1

Fortnite Chapter 4 Season 1 map
The new Chapter features no returning POIs from Chapters 1, 2, or 3. Instead, Epic Games provided a completely new landscape for players to explore. You can see the complete map above and refer below for every new location’s name.

Every weapon & item in the new season 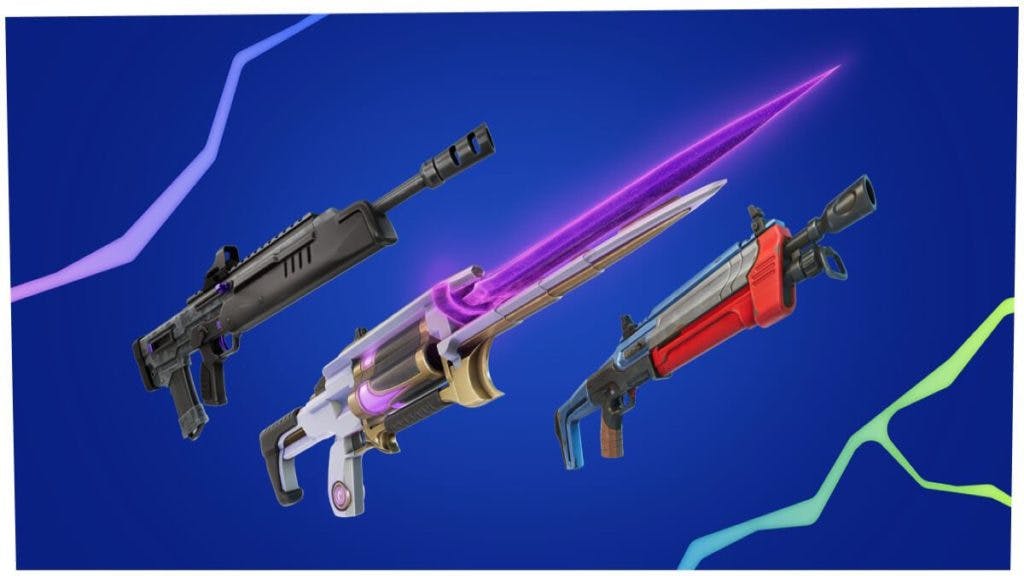 Red-Eye Assault Rifle, Ex-Caliber Rifle, and Maven Auto Shotgun
Like Fortnite Chapter 3, Epic Games developed several new weapons for Chapter 4 Season 1. These include two rifles, two shotguns, an SMG, a Pistol, and the Shockwave Hammer. Additionally, there are new healing items, a vehicle, and multiple returning items from previous seasons.
Here’s a look at the most notable items in the new Fortnite season:

New mechanics: the hurdle, claim your territory, and reality augments

Fortnite Chapter 4 Season 1 features several new mechanics worth discussing. Firstly, movement in Fortnite just received an upgrade with hurdling. While mantling and sprinting are still options, you can combine these maneuvers to hurdle over objects. Players can hurdle by running at a barrier, and your character will automatically vault over it.

This next feature in the new seasons allows players to capture a position and reap the rewards. Dubbed “Claim Your Territory,” you can navigate to any location with a flag and attempt to hold the point. If done successfully, the map will reveal all chests in the immediate area and drop weapons and healing items.

Lastly, we must cover the Reality Augment system, which functions similarly to perks in other games. These Reality Augments appear sporadically throughout each match. When prompted, players can select one of two options to enhance their in-game experience. Some include unlimited gas in vehicles and reloading weapons with light ammo quicker.
That covers everything new about the Fortnite Chapter 4 Season 1 patch notes. You can learn about the Battle Pass by checking out our in-depth breakdown.
Stay tuned to esports.gg for more Fortnite news and updates!

Matthew "MJP" Pryor
Editor | Twitter @MJP_FN
Matt “MJP” Pryor began following esports in 2008 when Halo 3 was on top of the world. He is now a Fortnite fanatic who has watched the game’s casual and competitive development since the 2019 Fortnite World Cup. Matt plays the game often while reporting on everything from skin collaborations to tournaments and everything in between.