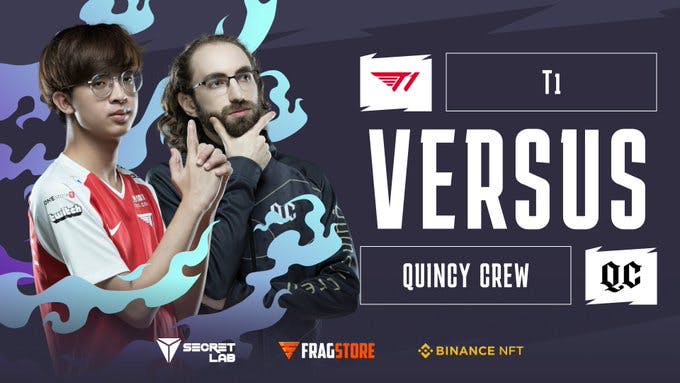 T1 guaranteed themselves top 3 with a brilliant victory over Quincy Crew, another playoff direct invite. Even a Broodmother and carry Nature’s Prophet couldn’t stop them at the AniMajor.

The Quarterfinals of the upper bracket were spicy today. With PSG.LGD taking down Nigma, while T1 faced off against Quincy Crew, another playoff invite. Both teams had already qualified for TI, but this match would secure a guaranteed top 3 at the event minimum. Heading in T1 were on good form following a dominant performance from Aster while Quincy Crew had a much rougher series against NoPing, despite coming away with the win.

The draft started off with some pretty standard meta picks. T1 picked Dragon Knight, Spectre, and Snapfire, while Quincy picked up the Luna and Enchantress, as well as the Winter Wyvern. There were some deviations however, with Quincy picking a Tidehunter and Death Prophet. This Spectre pick was a little scary as it is one of Nuengnara "23savage" Teeramahanon’s signature heroes. On the other hand, a strong meta pick of Wyvern is one of Avery “LoA” Silverman’s favorites.
The laning stage was a little rough for Yawar "YS" Hassan on the Luna trailing pretty far behind in his counterpart in Spectre. But he was able to catch up later on thanks to a kill in lane from Arif "MSS" Anwar, and Rodrigo "Lelis" Santos. As for the other lanes, they went relatively even.
Quincy sped up the pace going into the mid game, by taking the mid and bottom towers before the 10-minute mark, hoping to hit a power spike. Slowly building a lead, Quincy took an early Roshan to continue pressuring the map, while T1 tried to get a big fight to come back into the game. Carlo "Kuku" Palad did his best as the Nature’s Prophet to split push the map to delay the game for his team.

Quincy was not able not get what they wanted out of the Aegis, not being able to take any towers while T1 stalled the game out. A great fight from the squad down bottom was able to stabilize the game for T1. Then, Quincy realized they needed a big play to put them ahead again. They look to take Rosh and, in the process, found kills on the 23savage, Spectre, and the Kuku NP, as well as take the Rosh. Still, T1 still stalled out the game and continued to split push and waste the time of Quincy Crew.
But it all broke down when Quincy was able to take out 23savage at a crucial Rosh fight. After taking the Rosh, Quincy was able to 5-man behind the dominating presence of YS and quickly take buildings down with the help of the Quinn “Quinn” Callahan Death Prophet. A nail bitter of a fight at the end, but Quincy were able to chunk down the throne and take a win.

This draft saw the return of some more favorite heroes on both teams. We saw and Elder Titan for LoA and the MSS Hoodwink, and Ember Spirit for Quinn. T1 saw some swap ups for their lanes with a mid Doom for “Karl” Matthew Baldovino, and a last pick Phoenix for Kenny "Xepher" Deo. It seemed going into the game that the panel favored the early game pressure of Quincy Crew.
Quincy started out with a tri-lane with YS up against the 23savage Terrorblade. Quincy dumpster the top lane, leaving Leslao by himself in the bottom lane to get some levels. While sacrificing far in the bottom lane, Quinn also had complete free farm against Karl.
Quincy kept up the pressure and with the rotations from mid, getting some key kills on the top lane. LoA meanwhile continued to get some clutch stomp saves so his teammates could get out. Like in game two however, T1 made great counter rotations to defend towers, key heroes, and make space for 23savage, who had the favorable carry to carry matchup.

T1 Bring Out the Big Guns To Beat Back Quincy

Despite the laning stage, Quincy found it difficult to be able to break the mid tower. Karl on the Doom and Kuku on the Dragon Knight basically just stood in front of the tower to make sure it didn’t go down, finding a couple pick offs on Ember Spirit in the meantime. Both teams continued to dance around each other and take some clutch fights against each other.
Into the late game, the teams continued to get pick offs. In one big fight the teams looked incredibly evenly matched around the Rosh pit. 23savage appears to be the king of this fight, but a sick Aegis steal from Quinn seemed to salvage the hopes of Quincy. After a few more fights, T1 got some great pick offs with the help of Karl and Kuku on Quinn and Leslao and helped to break high ground. After a buyback from Quinn, Quincy tried to contest the Roshan, but with the bug teamfight ultimates from T1, they got obliterated. With a final Divine Rapier pickup form 23savage, T1 took the game.
Now the series is tied 1-1. Who will take the series, stay tuned to find out!

The final game draft had some spice to it. Quincy picked up a Broodmother first phase, while T1 fourth picked a Phantom Assassin, a hero practically un-picked in the tournament. Quincy also picked up a carry Nature’s Prophet, a hero that has been picking up speed in this position in both SA and NA. This draft reflected a lot of both of teams stills again. T1 going for the long carry game, while Quincy going for an early game pressure strategy.
In the early game, the lanes went pretty even, over than a few kills being picked up, except for bottom, which YS pretty handily won. As the game progress, the Leslao Broodmother continued to pressure the top tower. With some great rotations form the supports and Quinn on Windranger, Quincy was able to quickly take that tower before ten minutes and take some great kills.
The midgame saw Quincy continue to pressure towers and take control of the map pulling far ahead in the networth. Still Karl as the Sand King continued to posture himself to defend against the constant pressure, and like before, making space for 23savage. Quincy continued to batter T1 and picking off both supports and cores and Quinn and Leslao continued to spiral out of control.

T1 Bring The Hammer Down

Despite the lead, T1 took several clutch fights with Matthew "Whitemon" Filemon taking some big stuns on the Abbadon, and Xepher getting some great Winters Curses. One fight in particular led to the extremely important second Rosh that completely changed the momentum of the game.
After talking a series of fights were 23savage completely blew up the lineup of Quincy and pressed into the base. Despite a brave hold from YS, The T1 heroes clinched out the victory.
With this win, T1 get a guaranteed top 3 facing off against PSG. LGD tomorrow. With this loss, Quincy drops to the lower bracket to face Vici Gaming tomorrow. For more coverage of the WePlay Animajor, follow us at esports.gg!
Stay tuned to esports.gg for the latest Dota 2 news and updates.

Christian Decker
Contributor
Christian is a student from Schenectady, New York, studying at Albany Law School. He is an avid gamer, writer, podcaster, and content creator who is passionate about Dota 2 and music!