In the midst of T1 dominating TSM in an elimination match, Yassine “Subroza” Taoufik tweeted out mid-game that T1 head coach David Denis was communicating with his team and typing in all-chat. Subroza and his TSM teammates allege the coach was illegally calling out strategies and player locations around the map.

After reportedly receiving a warning, the chatting continued from David Denis resulting in T1 being disqualified and forfeiting the match despite looking to close out the series 2-0. The in-game communication violates rule 7.2.11 of Riot’s official Challengers rule book, “unauthorized communication.”

The rulebook states, “players may not text/email or use social media while in the match area. During the match, communication by a player should be limited to the other players on the team.” Furthermore, the rules state the tournament operator may choose to investigate any “possible breaches” and players could face sanctions for misleading the investigation.

As of now, the claims of improper communications are still allegations. The question then becomes what did David Denis type in chat to warrant such a harsh punishment? If it’s anything remotely close to a competitive advantage for T1, there could be additional consequences for the team and coach.

TSM star Matt “Wardell” Yu is the only player so far as to explicitly state what Denis typed in all-chat: “help sewer.”

If these claims are proven true, which by all accounts is likely, T1 was in clear violation of rule 7.2.11. Thus, the decision to disqualify T1 had merit and the result is a deserving ending in a forfeit.

Moreover, It’s not a situation without precedent. Only last week, G2 Esports coach Daniil “PipsoN” Meshcheryakov was caught on voice communications against Vitality. He was relaying information to players as an in-game leader would. Riot levied no punishment onto G2 as of today, showing an inconsistency in the ruling from region to region.

The ruling eliminated T1 from potentially qualifying for Stage 1: Challengers, giving TSM a free pass to Lower Round 5. T1 will still have a chance to qualify in Open Qualifiers #2 next week, pending any additional punishment. TSM plays Akrew tomorrow at 4ET.

EG Pho: "I think if there's an optimal way to play Valorant, Cloud9 are close to it"

How did the community react?

The community was visibly surprised at the ruling, especially since T1 was dominating the match.

Cloud9’s leaf believes the ruling should have been more specific and T1 should have just forfeit the map instead of the series.

Meanwhile, others have expressed their surprise at Riot enforcing the communication rules in North America while EU teams often flout the same.

Why was T1 disqualified?

T1 had to forfeit their VCT NA Open Qualifier #1 match against TSM for violating rule against unauthorized communication in-game. T1 violated section 7.2.11 of the rulebook and are now eliminated from the event. 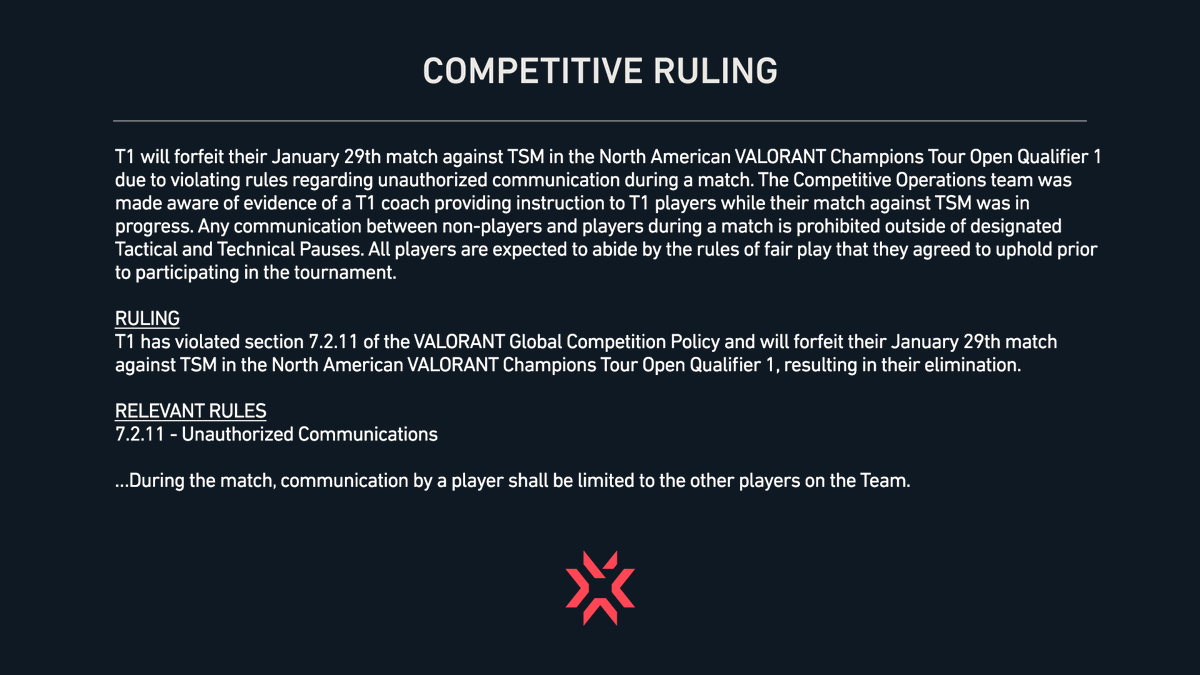 Who can communicate during a VCT Match?

During a Valorant Championship Tour match, communication by a player will be limited to other players on the team.

Who is T1’s Valorant coach?

David Denis is the coach for T1’s Valorant roster.

What is T1’s Valorant roster?

Did T1 use VPN in their official matches?

Wardell had alleged that V1 used VPN servers in their matches. But the tournament organizer has refuted these claims. Nerd Street Gamers has confirmed T1 did nothing wrong in terms of manipulating ping via Reddit. 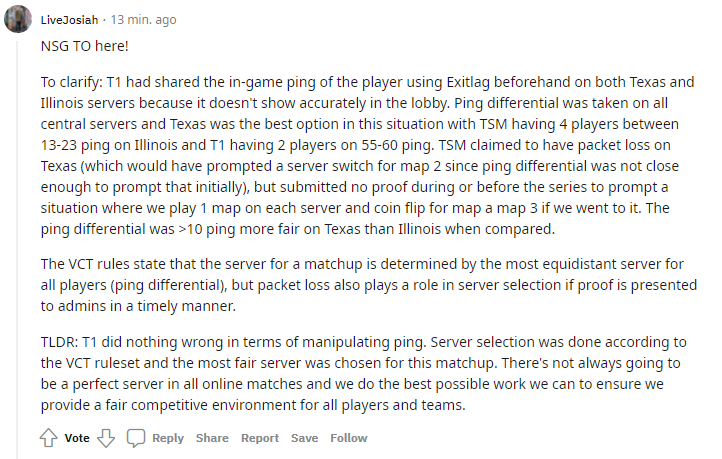 Stay tuned to esports.gg for the latest Valorant news and updates.

Blake Van Poucke is a Valorant writer at esports.gg. He found esports through the early days of MLG and the Super Smash Bros Melee scene. He's been competing and writing about esports dating back to 2008. He has written for several publications and wishes to return to in-person esports events in 2022