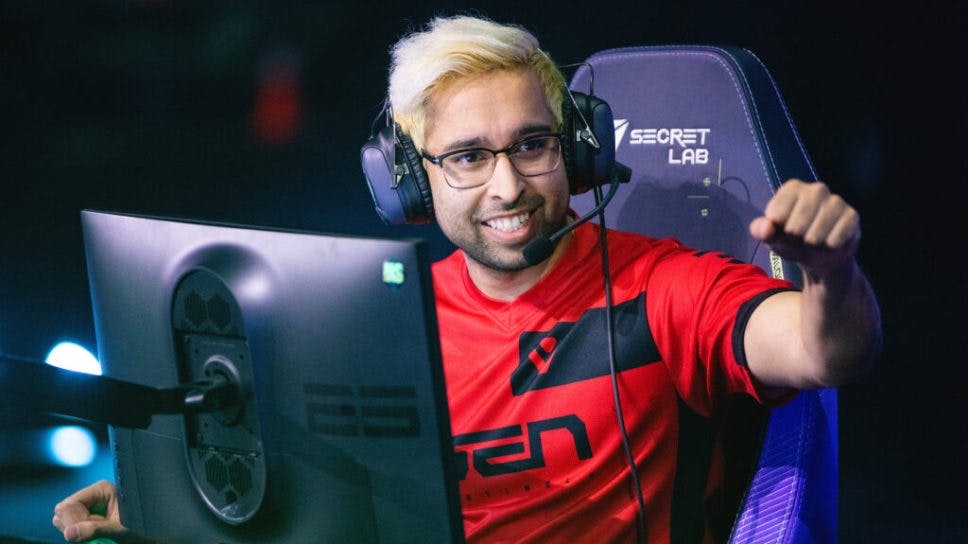 Sen ShahZam: “I always remember what it is like to be a team looking at the top from the bottom.”

Sentinels IGL Shahzeb “ShahZam” Khan is the leader of VALORANTS best esports team through a mindset of work smarter not harder.

The Sentinels are the best team in VALORANT as the pressure rests on them to take North American esports to international dominance in 2021. Predominantly a group of CS:GO, the Sentinels have been in control as the North American group refines their gameplay every event. However, at the core of any great team in esports is the man calling all the shots.
And for Shahzeb "ShahZam" Khan, the transition from CS:GO to VALORANT is a decision that turned a dwindling CS:GO pro player into the greatest IGL in the world.
In this interview, we speak to Sen Shahzam to talk about the pressures of being the best team in VALORANT, being given freedom to control practices by Sentinels and how the fans motivate him.
Congratulations on qualifying for Berlin. Talk to me about the feelings of making Berlin and overall your consistency as a team?
Sen ShahZam: It feels really good. I think we are also sending three really good teams to Berlin as well. Envy are looking really good as well too. So I'm pretty confident going into Berlin. Still, even though people may view us as the best team in VALORANT, this game is crazy. As you can see by the teams going to Berlin, the top team can change instantly. For us, we really are focused on one match at a time. If we think too far ahead, then we will get a bit careless. Still, whenever you come out on top, in whatever fashion, it is always a good feeling. It is relieving, especially with the format for qualification to Berlin and eventually VCT Champions to have that weight off your shoulders. It gives us the ability to try different things to become better.
I imagine it can be very difficult to always have that pressure of being the team to beat.
Yeah, every tournament, we are the favorites. It's been like that for a year and it seems like every time people start counting us out, that is when we begin to shine and evolve as a team. We look at the critics and ignore the noise and focus on what we are doing and believing in the process. I know what this team is capable of.
What is it like being at the top, for this amount of stretch? In CS:GO, there were not this many highpoints for your career like there are with Sentinels.
Sen ShahZam: Yeah, it's definitely been a unique feeling when all eyes are on you. We notice other teams will try to copy another team's playstyle, but we never had to do that. So whenever we see a team try to copy our playstyle, it gives us confidence. It is easy because we know the weaknesses of our playstyle. So if we play against someone trying to be us, we can capitalize on the mistakes because we know what they are. I also feel as if people respect us when facing us so they play more timid.
That is definitely a factor and players feel it. That is personally what is very new to me in VALORANT. It is something I am not used to, getting that respect from other teams. I always remember what it is like to be a team looking at the top from the bottom. Even though it has been a year since we won our first tournament, I am not used to the feeling. It is awesome knowing we are the top dogs. Now we just need to continue evolving to stay at the top.

"That is definitely a factor and players feel it. That is personally what is very new to me in VALORANT. I am not used to getting that respect from other teams. The feeling I always remember is what it is like to be a team looking at the top from the bottom."

-Sen ShahZam
What are some of the adaptations that you've had to make as a team? From your perspective, how do you continue evolving as a player and team to stay at the top?
Sen ShahZam: Oh yeah. It's so much more difficult than a game like CS where the game kind of stays the same. I would say the thing we continue to evolve is our timing for plays. The game is constantly evolving, and we have to constantly evolve with it. I feel like you see teams kind of pop off in NA for a little bit, but then people figure out how they play combined with meta changes. That's how we keep this consistency.
We are constantly experimenting in compositions. For example, on Haven, we are always running a completely different comp. Like it varies match to match every single time. That versatility allows us to always evolve our playstyle. We are constantly making adjustments to our playstyle on certain maps. This helps us figure out what is the best composition and playstyle for any given opponent. There is always something in our backpocket that we can pull out.

-Sen ShahZam
I'm curious as to how the practice different now versus back when you were in CS:GO. Do you feel like there is more work with Sentinels than before? Talk to me about the differences.
Sen ShahZam: It depends. When I was on Complexity in CS:GO, the practice schedule is really rigorous. Our whole day schedule is built out, it was really long practice days and hours of scrims. When we built Sentinels, I run our practice schedule and the structure of how I want to run the team. I made sure to take the good stuff, but also not do the stuff that I didn't like. I made sure to make the focus practice more on quality than quantity, not us just going through the same review and motions. Essentially, I did not want practice to feel like a long work day. If we get quality practice, we're going to focus on that and it keeps it exciting.
Nobody's dreading getting onto a practice. We all look forward to playing the game together. That's the biggest focus. I want to avoid us burning out and I want to always keep the game fresh at the end of the day. I feel like we have a really healthy environment when it comes to practice. There's no pressure from management. They give us the freedom to run our schedule and how I build it. And so far, it's worked really well.

Sentinels arriving at VCT Masters Reykjavik. Their breakout tournament.
Is that what gave you the comfort to make that switch into the IGL role?
Sen ShahZam: Yeah, so I think there's always a natural progression for me, considering I played for so long. You know, I played with a lot of good IGLs in CS:GO. I feel like I learned a lot from those experiences. Also, when we're building the team, we decide on the rules and who would ideal. I figured that I didn't want to sacrifice performance and I didn't want to pick up an IGL just for the sake of having the role. I feel confident in myself as a player and my understanding of the game. So, my thought process was to get players that are fully capable of like, you know, picking over around, and I'll do all the IGL work.
When VALORANT came out, you had just been released from Complexity. Did it feel like a possible renewal for your career at the time? What was it like switching into VALORANT after playing CS:GO for so long?
Sen ShahZam: Oh, 100%. When I got back from Complexity, I had heard about Project A coming out. I reached out to Riot if I could participate in the content creator alpha test, and you know, they included me in that. I had already had my mind set on making that transition before. So during that period, I focused on grinding FPL, just to keep my skills in tune. I was streaming consistently, to keep it productive, and, grow my brand.
But when VALORANT came out, I did not hesitate on the switch at all. I figured that if I put my all into it at the beginning, that I could totally make something out of it. My goal is to play with people who have zero hesitation about making the switch over to VALORANT. I want to play with people who want to play VALORANT full time. There are a lot of players are kind of iffy on it, but I knew that if we were the first to get working hard, we could do something special.
What has that growth been like for you switching over to VALORANT even brand wise?
Sen ShahZam: I'm already way bigger than I ever was in CS. It's been pretty crazy seeing the growth of my stream as well. The fans, I feel like their personalities are really strong point with the teams right now. And they're a lot more connected than it was in CS. Fans are way more invested and they like you as a player and a person. It's really awesome. It feels like I am becoming an actual athlete or something and I am getting recognized so often now. I'm really enjoying every bit of it.
That's awesome. I'm glad that you're enjoying that. I just wanted to give you the last floor to just say any final words to Sentinels fans and your new community that you're developing your bigger brand that you're developing now.
Sen ShahZam: Yeah, we always appreciate the support. We see every single one of the messages people send and it does make a difference. That's the motivation for us to not just  play as a team, but stream, interact and really dedicate ourselves to the game. Everything we do is for our fans. So thank you and hopefully we keep making you guys proud.
Stay tuned to Esports.gg for the latest VALORANT news and updates.

Sage Datuin
Administrator, Editor, Author, Contributor, Subscriber, SEO Manager, SEO Editor | Twitter @sagedatuin
Sage been following esports since high school and has remained a massive fan ever since. When he's not working he likes to work out, knit and overthink things..