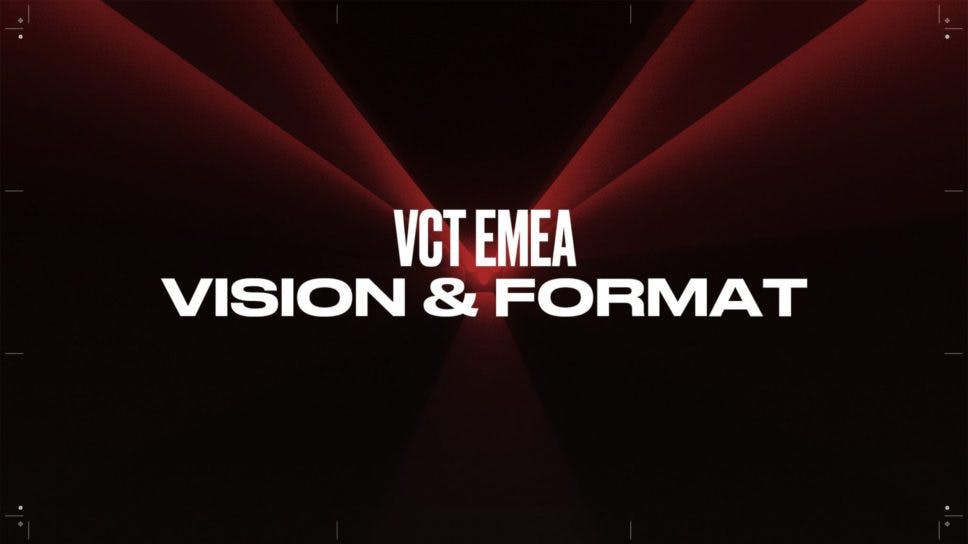 Riot Games have provided Valorant fans with a much needed look into the future of the EMEA region for the 2023 VCT season.

Riot Games have revealed details about the vision & format for the EMEA league in the upcoming 2023 VCT season.
The announcement was posted on the Valorant Esports website, as well as on the VCT EMEA Twitter page at 2 pm GMT. In the article, Riot has given us a much more detailed look into what we can expect for the future of the EMEA region within Valorant for the 2023 season and onward. Here is what we know about the new format for the VCT EMEA 2023 season.

From what can be gathered from the aforementioned article, it doesn't seem like things will change very much as far as the format for the EMEA League. The first major change being that we have 10 official franchise teams taking part in this singular league. The other being that all of the league matches will be held in singular venue. For the EMEA region, all of the teams will be competing at the Messe Berlin Charlottenburg in Germany. Here is a brief look at the format for the 2023 EMEA season.

Before the league matches get underway, all the teams from across the three leagues will be heading to Sao Paulo in February 2023 for the first major tournament of the year. It is hear that fans will get the chance to see all 30 franchise teams playing in a LAN-based environment for the first time. Afterwards we will then move into the League phase for the EMEA region.

The League matches for the VCT EMEA 2023 season will commence in March. The 10 franchise teams compete against each in a round-robin style competition, which will stretch over an eight week period. These matches will be held on Wednesdays, Thursdays, and Fridays, for seven of the eight weeks, with one "Super Week" to round things off. All of these matches will be streamed live. It will also be played in front of a live audience at the Messe Berlin.
Once those matches have concluded the focus will shift toward the EMEA playoffs. This is where the Top 6 teams in the bracket will compete to be crowned the best team in the EMEA region. The top teams from the region will then go on to compete against the best teams from all three regions at the 2023 Masters tournament in June.

Following on from Masters, the EMEA league will move into the LCQ phase in July. But this time around the teams will be playing for more than just a spot at Champions. Because we will also see the Ascension tournament taking place in July. It is here where teams within the new EMEA Challengers will compete for a chance to secure passage into the VCT for next season. Meaning that now there are a whole lot more consequences in store for those who don't finish the 2023 season on a high note.
Once the matters of promotion and relegation have been settled, we at last come to the big one; Champions 2023. There we shall see the best teams from the three regions battle it out once more, and at the end of it all, we will have our 2023 VCT World Champions.
Stay tuned to Esports.GG for all of the latest news regarding Valorant and more.

James Bassett
Contributor | Twitter @TheMaverickJB
James Bassett, otherwise known by his in-game name Maverick, is a freelance writer, gamer, and sports enthusiast from Reading, England. He has been an avid follower of Call of Duty esports for 8 years. Having written for sites such as TheGameHaus and DBLTAP, Maverick looks to provide people with entertaining, and insightful content. He is a proud London Royal Ravens fan.