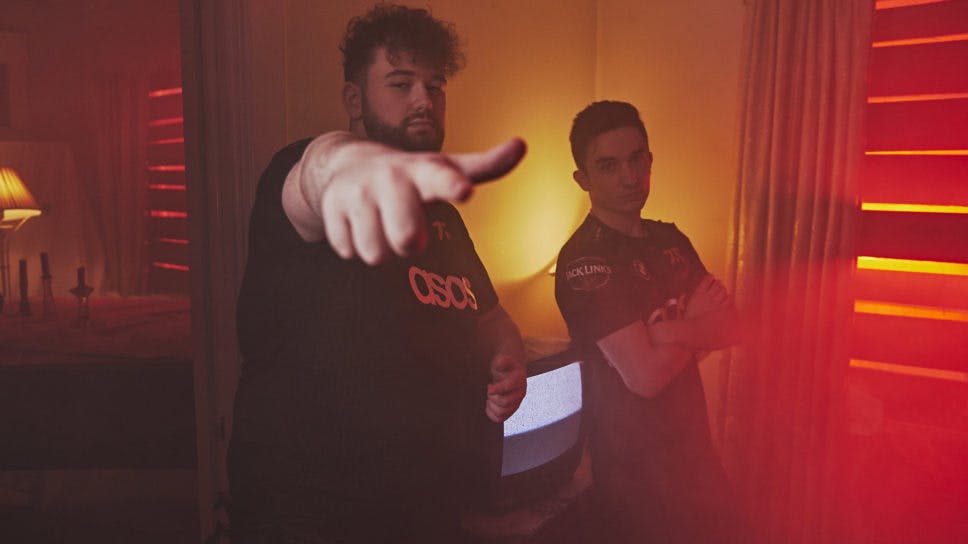 Fnatic’s Derke: “I think we are just on top of the EMEA region right now and we will take the grand final easily.”

Fnatic is the first team to reach the EMEA Challengers Grand Finals. Now, can they win it all?

Fnatic booked their place in the EMEA Challengers Playoffs Grand Final after taking down Guild 2 - 0. This highly anticipated matchup between the top 2 seeds in EMEA provided plenty of excitement and intrigue. Though both teams were already guaranteed to be playing at Masters 2 in Copenhagen there was still the matter of who would finish at the very top of the region.
The match saw highlight reel performances being generated across the board for Fnatic's squad. All of which kept Guild from breaking Fnatic's win streak going in Challengers. Their win also sees Fnatic competing in an EMEA Challengers Grand Final for the first time since Stage 2 of last season; the stage when Nikita "Derke" Sirmitev joined the team. When asked about how happy he was at his team's improvement since then in his post-match interview he gave the following response:

"We have improved a lot. And with the addition of Alfajer and Enzo we got more firepower and discipline. I think we will take this Grand final. Sorry for the three teams battling it out in the lower bracket right now. but I think we are just on top of the EMEA region right now and we will take it easily.

Fnatic Derke
Despite their loss to Fnatic it is unlikely that this result will faze Guild Esports all that much. Though they drop into the lower bracket final they are already guaranteed to be attending Masters 2 in Copenhagen. All that remains is where they will be seeded for the tournament next month.

NRG tex: “It definitely feels good to be a ‘heavy hitter’ in NA. I think it’s long overdue.”

Fnatic make use of all their utility on Bind

Starting off this match we headed to Bind for Map 1. There were surprises from both teams at the start with Derke opting to play Raze instead of Chamber. Yet the more surprising twist was that Saif "Sayf" Jibraeel was opting to play the Chamber alongside Leo "Leo" Jannesson utilizing Fade over Sova.
Fnatic managed to take the first pistol round in dramatic fashion with a clutch defuse. They then followed this up by winning three of the succeeding four rounds to take an early lead. Guild were able to flip the script a bit to take the lead at 5 - 4, with Derke having a very quiet map in the first half. But the Finnish menace pulled out some incredible blast pack acrobatics to tie the map at 6 - 6 to cap off what was a very close first half.
Fnatic took the second pistol round as well as the following round to give themselves a good start to their offensive half. And Guild were made to feel the orange tide as Fnatic continued to poke and prod at them in near flawless fashion; including some skillful and, somewhat annoying snakebite utilization from Emir Ali "Alfajer" Beder's Viper.
Sayf managed to help Guild win a couple of rounds with his chamber play. But in the end the rest of his team weren't able to step up to the plate in the half. Leaving Fnatic to close out Bind 13 - 9 and take a 1 - 0 lead in the series.

Faze Babybay: “It’s really nice to know that if I’m not performing to where everyone expects me to perform, we can still pull a dub out & in the fashion that we did”

The explosive Faze duelist, Andrej “BABYBAY” Francisty’s, spoke about playing on the best roster of his career after sending 100 Thieves home.

Alfajer and Mistic pull off sensational plays on Haven

Despite how things shaped up for Guild in Map 1 there was still considerable hope that they would be able to turn things around on their map pick, Haven. And as they teams got set for map 2 we saw yet another interesting composition coming out from Guild. Leo and Sayf stuck with Fade and Chamber respectively, and Nikita "trexx" Cherednichenko went with Raze. The first time they have ever run this team comp on Haven.
Fnatic takes the first pistol round with Fnatic Derke getting a 3k to start things off on Haven. And despite winning the second round as well, the map turned into a scrap between the two teams. Guild managed to tie the first half at 4 - 4, in a similar fashion to what their efforts on Bind.
But Fnatic were not going to let history repeat itself. And thanks to two moments of sheer insanity from James "Mistic" and Alfajer, Fnatic were able to shutdown Guild's offense to take an 8-4 lead into halftime.
Guild took the second pistol round as well as the succeeding round to give themselves a chance of getting back into the game. And that certainly looked to be the case as they completely stiffled Fnatic's momentum to tie the map up at 9 - 9.
If this match has proven anything it is that Fnatic are never truly out of any round. A point made crystal clear as Fnatic managed to win four of the final five rounds; two of which came despite Guild holding a clear numbers advantage. And these efforts proved fruitful as Fnatic won 13 - 10 on Haven to close out the match at 2 - 0.
Stay tuned to esports.gg for the latest Valorant news and updates.

James Bassett
Contributor | Twitter @TheMaverickJB
James Bassett, otherwise known by his in-game name Maverick, is a freelance writer, gamer, and sports enthusiast from Reading, England. He has been an avid follower of Call of Duty esports for 8 years. Having written for sites such as TheGameHaus and DBLTAP, Maverick looks to provide people with entertaining, and insightful content. He is a proud London Royal Ravens fan.