The Game Awards 2022 are happening, which also means the Steam Deck giveaway. Here’s how to fix the broadcast loading error.

The Steam Deck giveaway. Image via Valve and The Game Awards.

If The Game Awards 2022 failed to load on your web browser, then log in to your Steam account via the launcher. Click on the "Store" tab and then press the "Tune in Now" button. Press the "Register Now" button. Click the back button. Then, click the forward button and return to the livestream's page.
At the bottom of the livestream, there's a blue and purple banner that reads, "Loading latest Steam Deck winner..." alongside a countdown. If you're successfully registered, then there's text on the right side of the banner that indicates this. Every minute, a new winner is announced there. 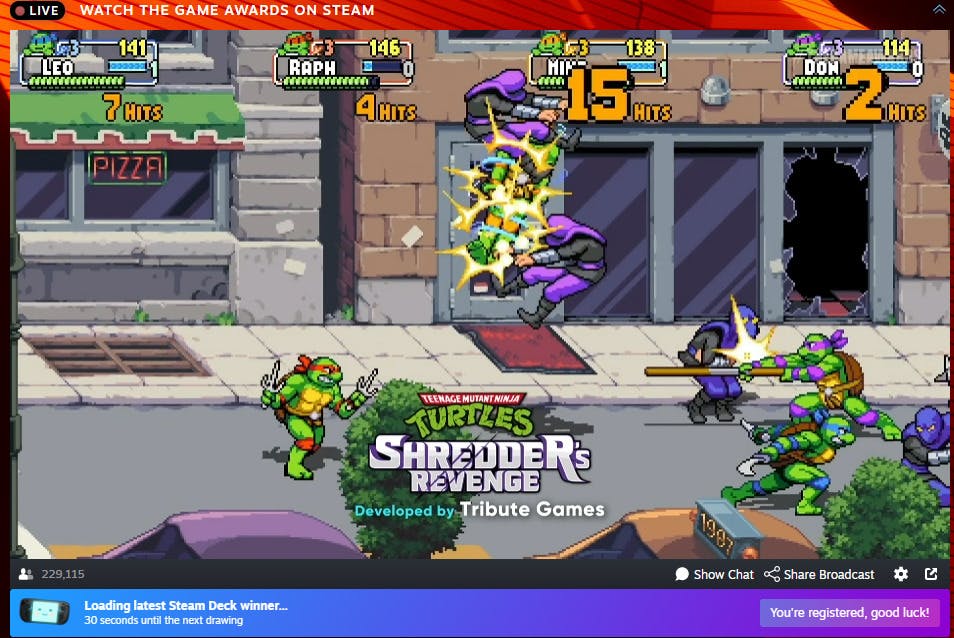 Giveaway winners banner. Image via Valve and The Game Awards.

At first, the Steam Deck giveaway page indicated winners by their Steam names. It's now a bunch of numbers at times. These numbers are just each winner's SteamID. A SteamID is typically an account's 64-bit ID, which is a 17-digit number.

What does claim mean in the chat?

When you open up The Game Awards 2022 chat, you may see lots of viewers spamming "/claim" in hopes of winning a Steam Deck. Entering this in the chat is unnecessary. The official rules don't mention anything about typing out "/claim" in the chat.

The Game Awards will feature a Steam Deck giveaway. Image via Valve.

How would I know if I won the Steam Deck giveaway?

The Steam Deck winners are announced in The Game Awards 2022 livestream via the blue and purple banner. You will also receive an email from Valve if you win a Steam Deck.
"Steam Deck winners will also be notified by email to the email address associated with the winning Steam account; in that email, Valve may request shipping information for the sole purpose of delivering a Steam Deck prize to such winners," according to the officials rules. "Steam Deck prize winners who do not provide valid shipping information in one of the Giveaway Countries by December 16, 2022 will forfeit their prize."
Be sure to check out the rest of the rules to ensure you're eligible for a chance to win. Remember that one of the requirements is to have made a purchase on Steam between 4 p.m. PT on Nov. 14, 2021 and 3:59 p.m. PT on Nov. 14, 2022 from one of the eligible countries.
That's all for now. Stay tuned to Esports for more gaming news and updates.