Breaking news: Razer have announced a massive exclusive sponsorship with League of Legends’ most successful player of all time, Faker.

Something that seems synonymous with success as an athlete is having your name on the side of a shoe or their weapon of choice on the field of battle - now one of the best to ever touch a mouse in League of Legends will have one of his own, Faker.

A historic individual sponsorship with the greatest of all time Faker

Razer has announced that they will be working with T1 star mid-laner Lee ‘Faker’ Sang-hyeok to design a line of co-branded products, including a mouse. Faker has long used Razer products, so this lines up with his personal brand extremely well. As Air Jordan was to Michael Jordan and Nike, Razer is now hoping their Faker line becomes just as famous.
“It is great to work with Razer again who has maintained its high standards for gaming hardware,” says Faker. “I look forward to collaborating with their team; developing my first ever gaming mouse and designing gaming peripherals. I would be most proud to tell the world that it was something that I had a hand in creating and bringing to life.”

“I look forward to collaborating with their team; developing my first ever gaming mouse and designing gaming peripherals. I would be most proud to tell the world that it was something that I had a hand in creating and bringing to life "

T1's FAKER ON HIS EXCITING NEW PARTNERSHIP WITH RAZER
This is the first time that Faker has had his own line of hardware, including mice, mouse mats, and phone cases. The line will be sold through the T1 SHOP in Seoul. As part of Razer Customs, Faker will design licensed Razer hardware. 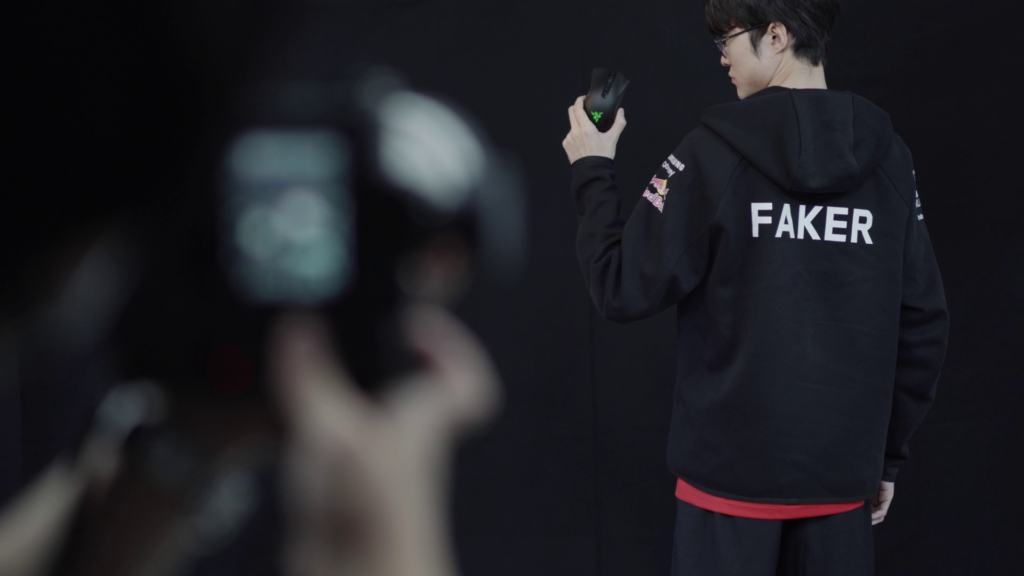 Now you can have the power of a three-time World Champion in the palm of your hands.
"I’m very excited that T1 and Faker are partnering with Razer to develop Faker’s first-ever branded mouse,” T1 CEO Joe Marsh said. “It’s an exciting time in our history and we look forward to building something special for gamers around the globe with Razer.”
In line with Razer’s plans to support the next generation of esports athletes, Razer will also be equipping Faker and T1 Academy players with award-winning hardware such as the Razer Blade laptops, Razer BlackShark V2 headsets, Razer Viper Ultimate wireless gaming mouse, and the Razer Huntsman keyboards.
“There is and there will forever be only one Faker,” Flo Gutierrez, Global Esports Director at Razer said. “He’s a living legend that has inspired and is still inspiring millions of gamers around the world. We are most honored to have him joining the Team Razer family and definitely excited about our astonishing upcoming line of products.”
While Razer has worked with influencers in the past, such as Jack “Courage” Dunlop, this is their first sponsorship of an active esports player specifically. Razer is also currently working with other esports teams on branded merchandise, like Alliance and Mousesports, but those deals don’t include a line for any of their specific players. T1 has a long history of being partnered with Razer for their own line of licensed mice and mousepads themselves, with the first having debuted in 2017.
Faker and T1 have just qualified for Worlds 2021, marking their return to the stage that made them one of the most famous esports brands in the world.

Dustin Steiner
Administrator, Editor, Author, Contributor, Subscriber, SEO Manager, SEO Editor | Twitter @GetSteinered
Americas Editor for Esports.gg, Dustin Steiner brings a decade of esports newsroom experience to bring fans what they need to know, helping them keep their finger on the pulse of esports as it happens. When he's not helping run the newsroom, you can find him grinding it out on Smash Ultimate, Final Fantasy 14, or probably binge watching Gundam.