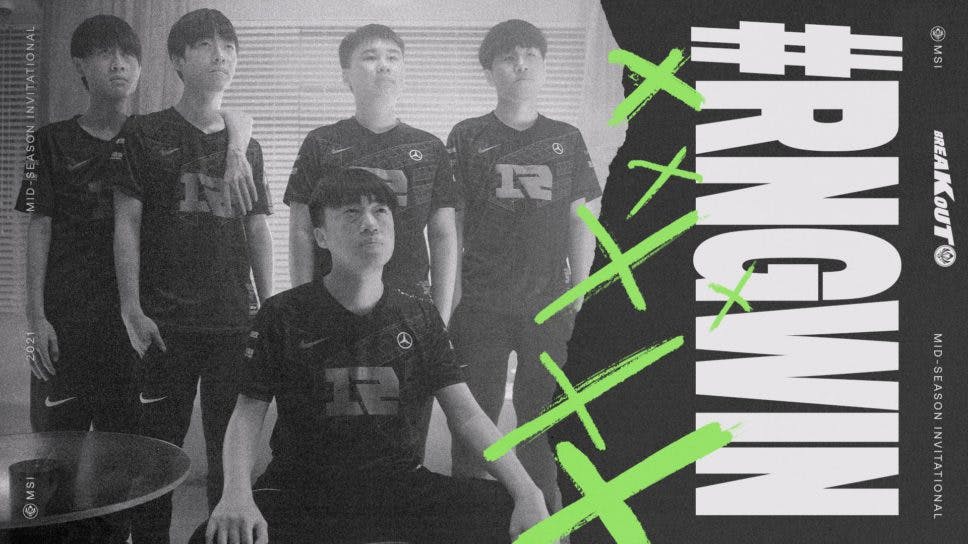 MSI 2021: RNG sneaks through the backdoor to take down Cloud9

It was heartbreak in Iceland for Cloud9 as RNG was able to backdoor the LCS champions to clinch the victory. RNG now goes into day two with a solid 2-0 record.

Royal Never Give Up stepped up to the plate and answered the critics. The community was unsure of the true ceiling of this RNG lineup after what was a favorable Group Stage group. The LPL champions dispatched Damwon KIA, followed by a remarkable backdoor victory over Cloud9.
This was a big statement of intent from the former Mid-Season Invitational champions. With Damwon KIA struggling, the door has been left wide open for RNG. In-game two specifically, RNG is proving to be an unshakeable problem when the LPL side is flexing two marksmen into their draft. Here is how the draft played out in this match:

Xiaohu puts down a marker

Xiaohu has been a joy to watch thus far at MSI and is arguably the best top laner in the tournament. What makes Xiaohu so scary is his ability to flex an ocean of champions into the top lane and carry with them. This time it is no different with the LPL veteran destroying on Lucian. With RNG's limited engage composition, Cloud9 looked to punish this by putting Fudge on Malphite.
While Malphite is a solid pick into this composition, it is a horrible match up early on for Fudge. Xiaohu was able to pick on Fudge in this lane and at level 3, Xiaohu and Wei started the snowball in the top lane.
While the rest of the map was doing just fine on the side of Cloud9, it was going quite poorly as expected on the top for Fudge. This match up is brutal and Fudge did all he could, but come the tenth minute mark the C9 top laner was almost 40 cs down. With the lead they gained in the top lane RNG were able to secure both the tier one and tier two towers in the top lane very quickly.

While the game was going as poorly as it could have for Cloud9 on the top side, the North American champions once again started to defy the odds and punish the sloppiness in what should have been a definitive loss for C9. Cloud9 got a huge shutdown onto GALA as RNG was taking the mid-lane inhibitor. Minutes later, Cloud9 looked to be turning around another game with a five-for-nothing ace.

Who left the back door open?

If you are Cloud9 fan then now is the time to look away. C9 positioned themselves to start the Baron and force Xiaohu and GALA to move over to pit otherwise it would be a free Baron for Cloud9. For RNG fans, however, they have seen this story before and it does not end well for the other team. Xiaohu and GALA called C9's bluff and were able to crack open the C9 base. Cloud9 were able to secure the Baron, but Wei was the hero, stopping Cloud9 from backing, handing RNG the victory.
There was some positives for Cloud9 in this game, they have shown they are great at team fighting and even the best teams in the world have to respect C9 can flip the game on its head in a matter of moments. As for RNG, a 2-0 start is huge for the LPL side as it showcases they are the real deal and not a team buffed up by a group of weaker opponents.
Stay tuned to esports.gg for the latest League of Legends news and updates.

Jordan Marney
Editor | Twitter @MarnMedia
Jordan "Marn" Marney is an esports journalist from across the pond. Marn specialises in telling stories about League of Legends and Call of Duty. Marn has been a passionate esports fan since 2014 and has written for publications Unikrn, Esports Network, ESTNN and The United Stand.