With the eMLS 2023 season on the horizon, Esports.gg talked to the league commissioner and championship-winning player about the upcoming year.

On Jan. 24, 2023, the latest season of the eMLS will kick off, marking another year of partnership between Major League Soccer (MLS) and Electronic Arts. With the World Cup fresh in the minds of fans globally, and the 2026 World Cup in North America to look forward to, the eMLS is poised for a bumper year.
After the eMLS unveiled a robust 2023 schedule in early December, Esports.gg was able to reach out to both Evan Kashan, Commissioner of the eMLS, and Paulo Neto, eMLS Player for championship-winning Atlanta United, to answer a few questions about the upcoming season.

The eMLS 2023 schedule (Image via eMLS)
There’s plenty to be excited about for the eMLS’ 2023 season. Players will compete for the largest total season prize pool in eMLS history – $100,000. Each League Series broadcast will showcase more than 10 players and feature a new competitive format with enhanced coverage.
The remote qualifiers and group stages of each League Series will be featured on each eMLS club’s or player’s respective Twitch and YouTube channel, and fans can view the main bracket matchups on the official eMLS Twitch account.
The schedule and format are as follows:

Talking to the Evan Kashan, commissioner for the eMLS 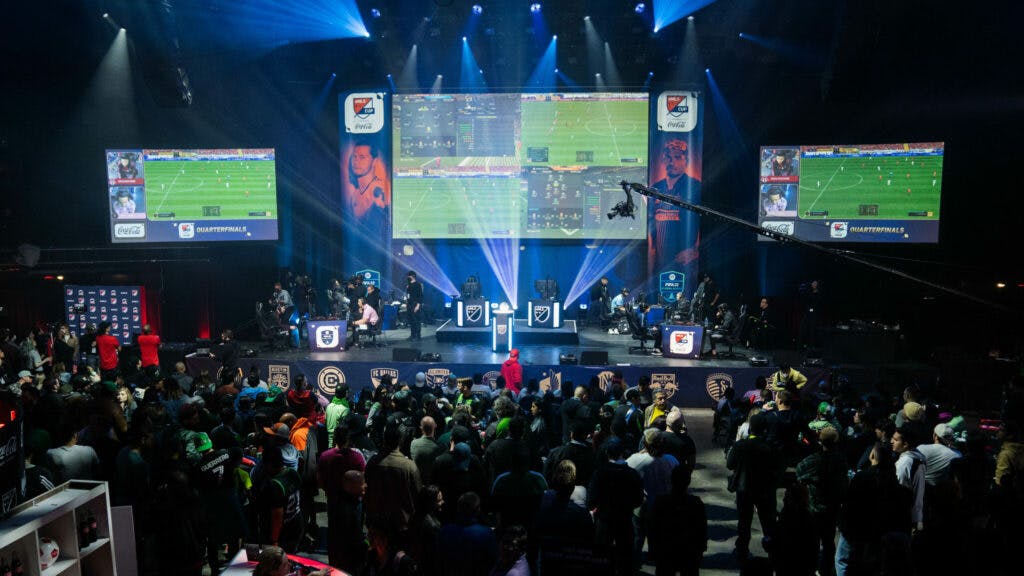 The eMLS Cup 2022, Day 2 (Image via eMLS)
Evan Kashan, commissioner for the eMLS, answered some questions for Esports.gg about the 2023 season. We started off asking him whether he thought this year’s World Cup, Team USA’s great performance there, and anticipation of 2026 have stoked interest in the eMLS. His answer in short: “Definitely.”
“Launching our season immediately after this year’s World Cup and the USMNT’s inspiring performance definitely helps soccer interest and interest in Major League Soccer as a whole. Soccer content in the U.S., whether physical or digital, is in higher and higher demand with each passing season. We have an amazing window of opportunity between now and 2026, and feel like we’re well-positioned to capitalize.”
But even with this incredible boost in popularity, there was a looming question. What about the fact that the next FIFA game won’t be a FIFA game at all? Electronic Arts’ licensing deal came to an end after 30 years, and from July 2023, the game will be known as EA Sports FC. We asked the commissioner how important the eMLS' ties to the MLS were with this official FIFA link coming to an end.

The eMLS Cup 2022, Day 2 (Image via eMLS)
“eMLS serves as the digital extension of the physical game that MLS provides to fans in North America and worldwide. With our partnership with EA Sports, we place authenticity at the forefront of the gaming experience. Functioning as a key piece of the MLS fan funnel, we are able to build esports events that bring our eccentric fan culture and traditions to the gaming world. In March 2022, we went to SXSW for eMLS Cup and exhibited the unique Austin FC fandom through the presence of their supporters’ band and the sounds of their fans chanting on their team in unison.”
Expanding on the change in branding for the EA Sports games in 2023, Kashan explained that the link to FIFA wasn’t as lacking as you’d expect. “Our EA Sports partnership comes to life globally as our top two players get direct bids to the EA Sports FIFA 23 Global Series Playoffs while our third and fourth place athletes get a chance to compete in the EA Global Series Play-ins, effectively putting these four players in prime position to compete in the FIFAe World Cup. We look forward to competing in EA Sports FC in the 2023-2024 eMLS season.”

Champ Paulo Neto will defend is eMLS title in 2023 (Image via eMLS)
Esports.gg also had the chance to ask defending eMLS 2022 champion, Atlanta United’s Paulo Neto, about his thoughts on the upcoming season.
Just like football is one of the most-played sports in the world, EA Sports football titles are some of the most-played video games in the world. How do you plan to defend your title?
Neto: “I plan to defend my title in the same way I won it last year, which is by working every day to improve, practicing regularly, studying my opponents, and staying sharp mentally to compete for another championship.”
How do you feel the eMLS will square up to global competition in 2023?
Neto: “I feel that eMLS is growing every year, and it’s important for our league to be a part of EA and FIFAe’s global reach. We have recently added a player from Europe to our league, so it’s a competition that FIFA players from around the world are watching.”
Are there any teams or players where you have a friendly rivalry?
Neto: “I have some friendly rivalries in the league: Gustavo from New York City FC since we are Brazilians, KingCJ0 from DC United as we played the final of the eMLS Cup last year, and Lamps from Minnesota United as we were the only two players from eMLS to compete at the FIFAe World Cup.”
The eMLS kicks off from Jan. 26 with the remote qualifiers. For more details, head to the official website.