Apex Legends zones can be revealed through datamining

Several pro players have spoken out against teams datamining information about Apex Legends zones. It is now being reviewed by ALGS admins.

Twitter is awash with discussion after it was revealed that some professional Apex teams are accessing Apex Legends zones through datamining.
A tweet from SSG Dropped began a discussion that spanned several Twitch streams and took Twitter by storm.
Reportedly, top teams like TSM, Furia and Alliance have gained knowledge about the areas that Apex legends zones cannot end. This is giving them a significant competitive advantage, and rival teams aren't happy.

Why is this a big deal?

In competitive Apex Legends, zone knowledge is crucial. When Pathfinder was the only legend that could scan the beacon, he was a 100% pick. Pro players spend days studying zones to try and improve their skill at predicting how it will pull and where the final ending will be.
What tends to separate some of the best players is their knowledge of Apex Legends zones. If you can predict the final ending from just an early beacon scan, you can quickly rotate to a very strong spot, or set up your game plan with a much higher chance of success.

It has always been known that while there is a zone algorithm, there are places on the map that the zone is blocked from ending. For example, there are no endings inside of buildings, to prevent 'heal offs'.
The revelation is that these excluded zones are in the files. Allegedly, teams such as TSM, Alliance and Furia have access to this information.

Sentinels coach Teq tweeted out an example of the information that teams have their hands on.
This is an old map, as there is no Downed Beast. However it clearly shows the detailed information about Apex Legends zones that exists in the files.
For example, if you knew that a certain POI only had endings in a very specific spot you could adjust the building you play in as a result of this information. Especially with there being so many zones in Apex, all just ever so slightly different, being able to exclude possibilities is really useful information. Clearly this information doesn't make you able to predict Apex Legends zones perfectly. But in a competitive environment, everything helps.
Understandably, because this information is not technically "public," some players are angry that it is available.
Pro players who didn't know that this was a thing, have had to gather this information through much more tedious means.
UPDATE: Twitter dataminer kralrindo has now shared the full, up to date, map of excluded zones for Worlds Edge, Storm Point, Broken Moon and Olympus. 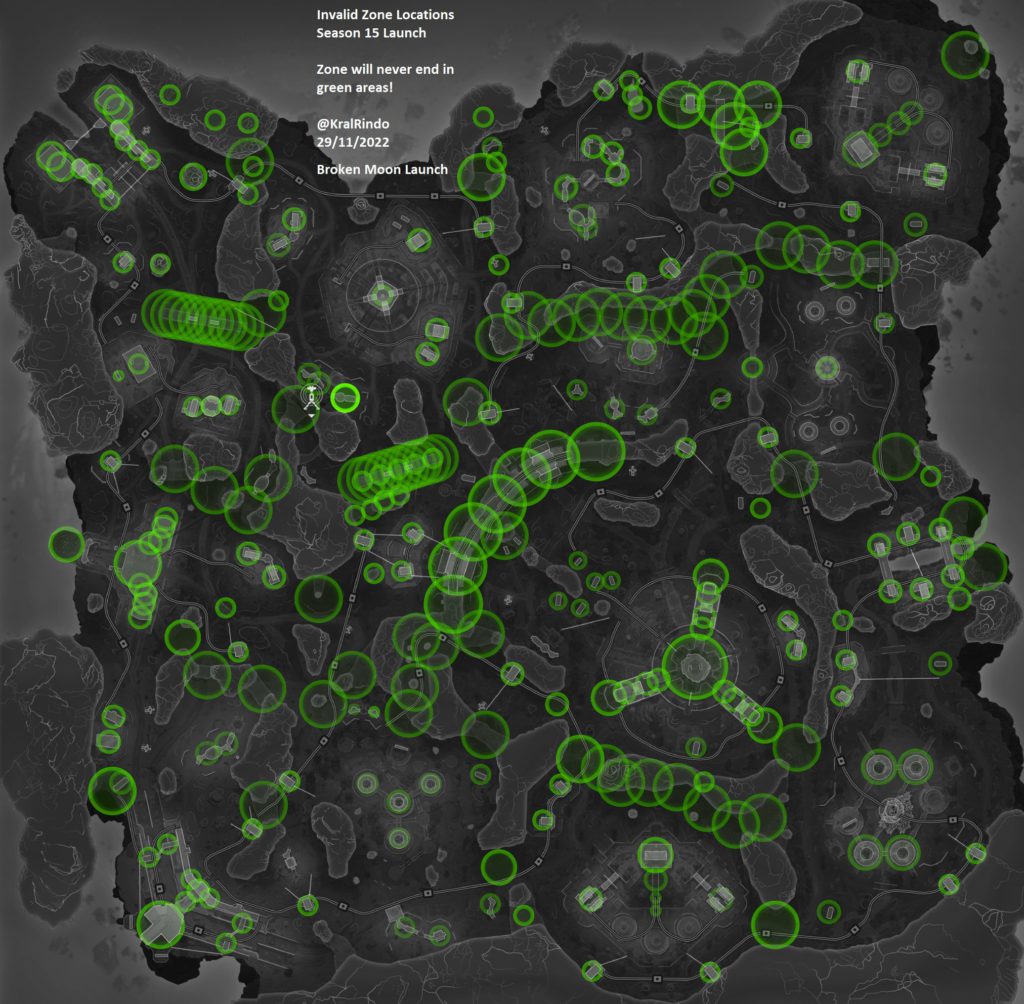 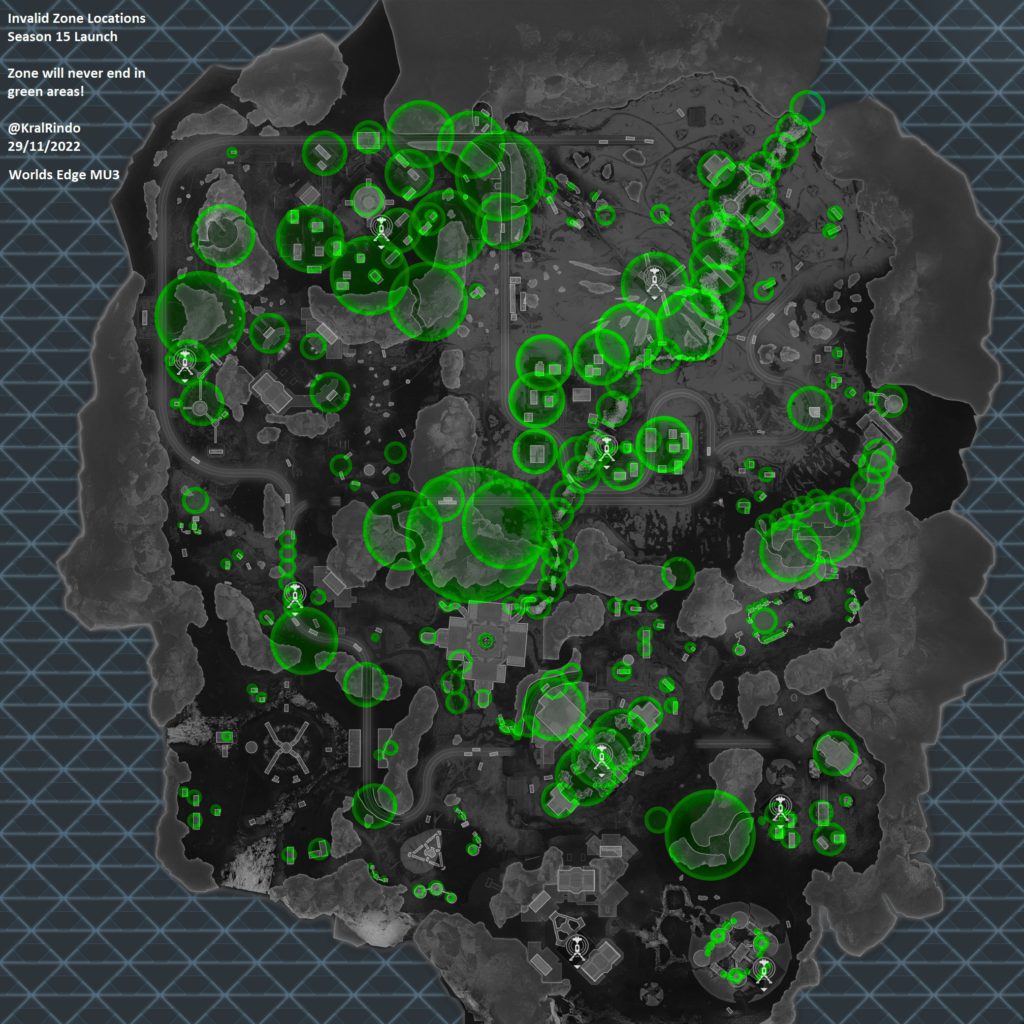 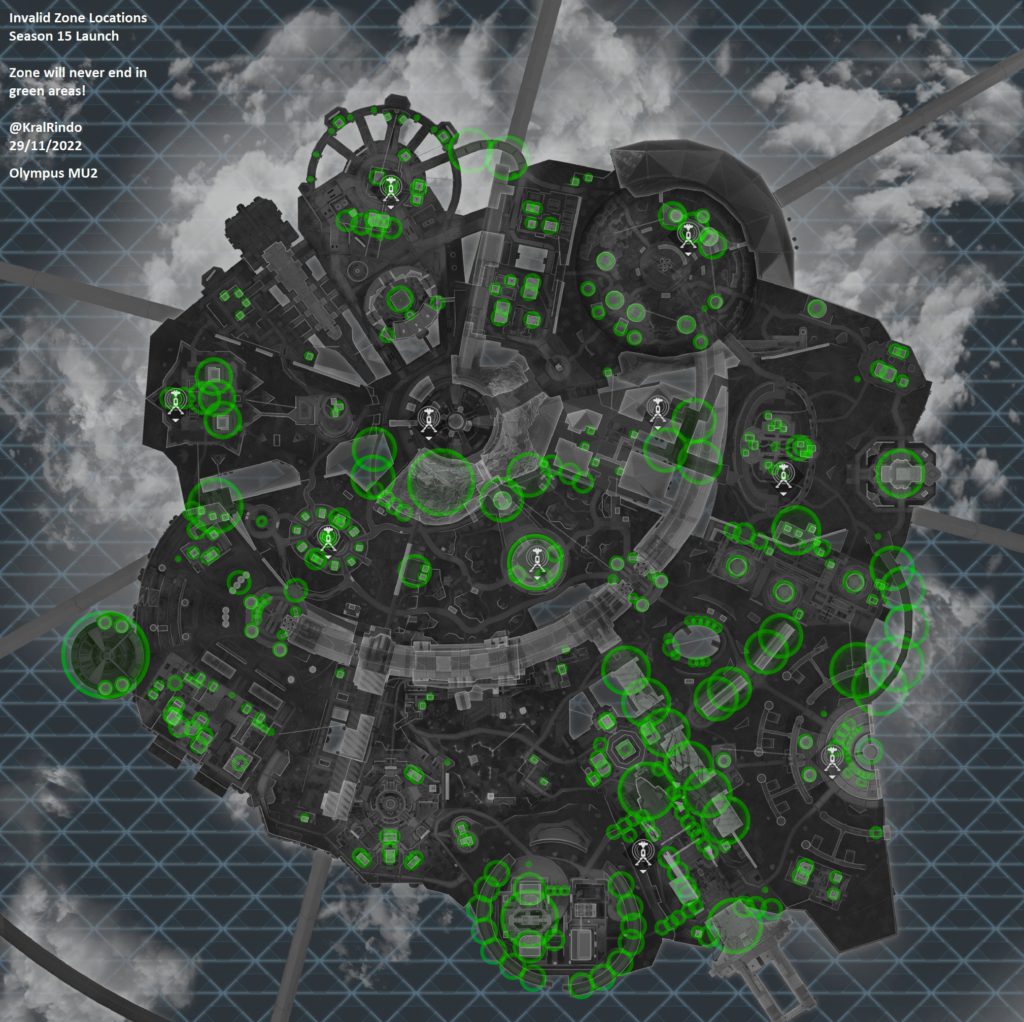 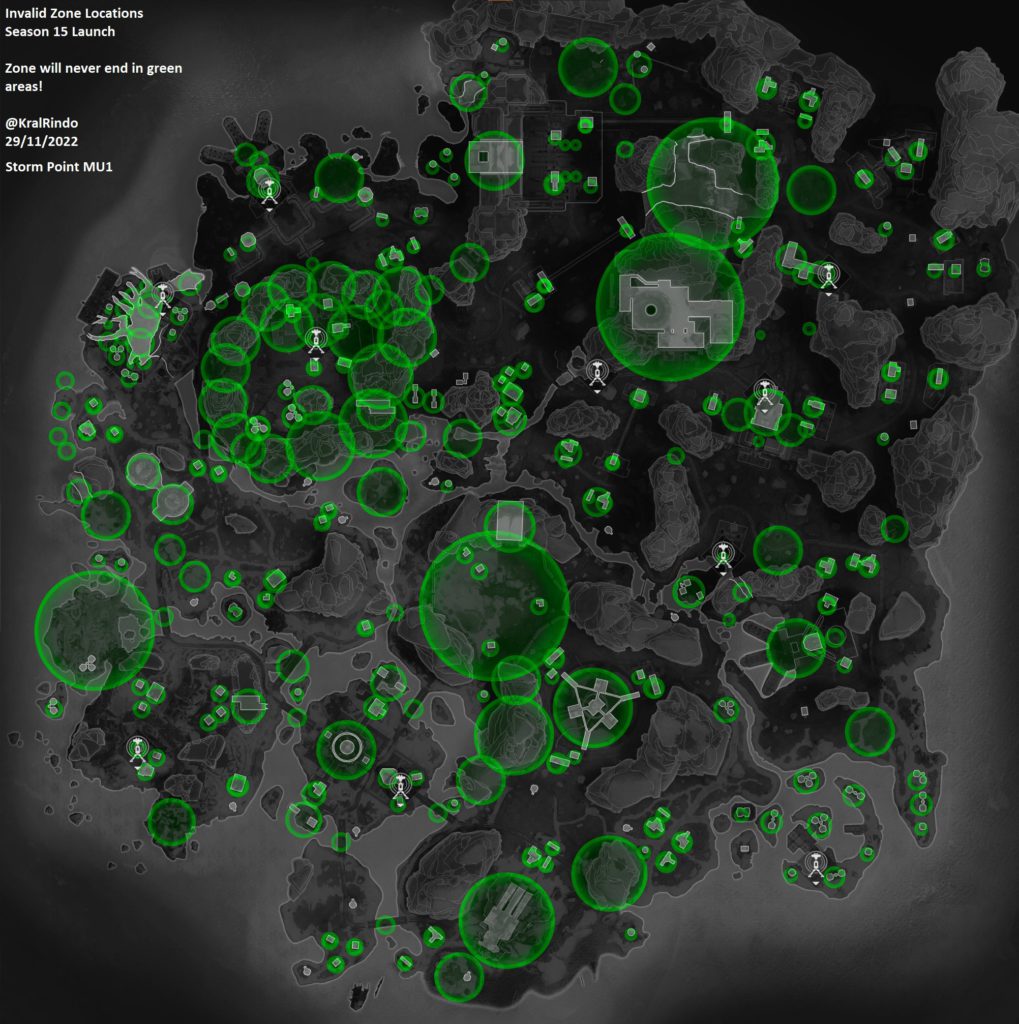 The EA terms and conditions seem to indicate that this could be against the rules.
"You may not reverse engineer or attempt to extract or otherwise use source code or other data from EA Services, unless expressly authorized by EA or permitted by law."
Obviously, there is significant room for interpretation here. EA have never managed to prevent data mining before, and it would be hard to prove who has and hasn't mined the information. Mining Apex Legends zones from the files could be seen as extracting 'other data'.

Could this be banned?

Sort of. Following the online commotion, Sweet confirmed that ALGS admins are investigating the situation.
What can EA/Respawn actually do about it? You could ban the people who have admitted to gathering this information. This wouldn't prevent people from still having the information, or mining it in future.
Instead, they could choose to make this information public. This is really the only way to level the playing field at this point. It's not like Respawn will change where apex legends zones can't end, almost all of the exclusions are made for game health. For example, preventing very unhealthy zones.
If this is ruled as legal, it will change the standard for Apex coaches and analysts. Though no matter what, teams that have been using this information have lost a slight edge now that this has become wider knowledge.
How will this impact ALGS, which returns on Thursday? To find out, keep it esports.gg!