The Apex Legends ranked grind can be quite the mountain to climb, but it helps knowing where you stand and what to expect. Here’s the lowdown.

In every new season of Apex Legends, there are quite a few brave players who embark upon a journey. A journey to the summit of the Apex Legends leaderboards. Or at least as high as they can go. For many multiplayer gamers, ranked matchmaking is a point to prove. It's something to demonstrate their skills and duke it out against other players to see how good they are at the game. For some of the best Apex Legends players, Ranked Matchmaking is a ladder for entering the pro-scene.
For many players, it would be a good idea to know where they stand and what kind of company they're keeping. Thanks to third party stat trackers like Apex Legends Status, this knowledge is easily available. For those looking to test their mettle, here's the lowdown on the Ranked scene in Apex Legends. 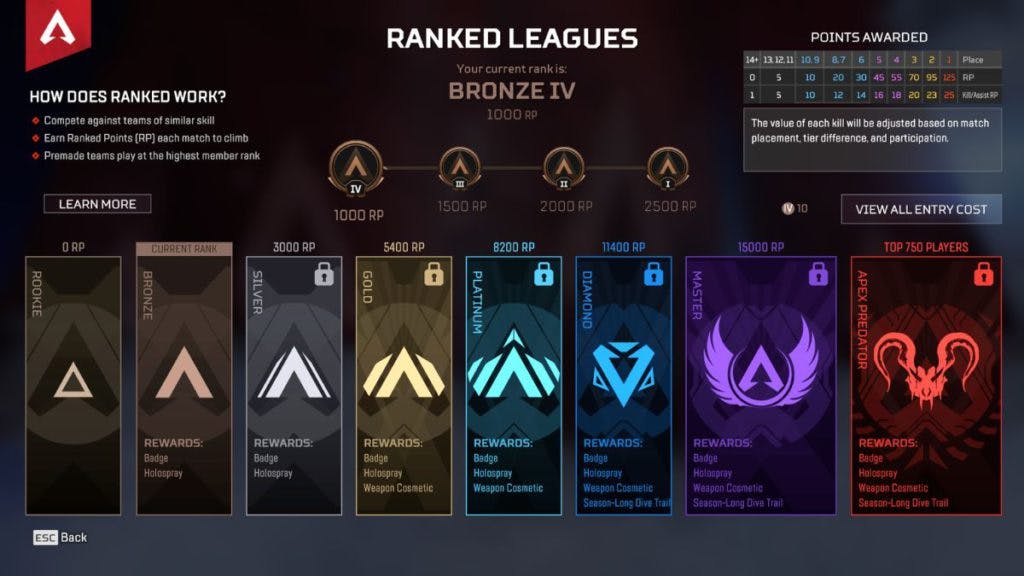 Apex Legends Ranked information. Image via Respawn Entertainment and Electronic Arts.
Unlike most other modern competitive shooters, Apex Legends has a fairly simple Ranked system. Players must grind through seven tiers of ranks. They get rank points (RP) for kills, assists and match placement. Each season of Apex Legends features two splits of Ranked Matchmaking.
Each tier has four stages to climb through and advance through to the next tier. RPs stack across tiers, so there's no need to worry about starting from scratch after each tier.
Players start out at Bronze IV and can potentially climb all the way through Silver, Gold, Platinum, Diamond, Master and finally, Apex Predator. Apex Predator is a rank assigned only to the top 750 players by RP count. So beyond master, it's a whole different ballpark.
Things start to get quite challenging from Gold because of factors such as match entry cost and negative placement points. Beyond Gold, players start to get much more competent. Climbing through the ranks turns into the challenge that it is.
Placement points are key, and players get more tactful and less aggressive at higher ranks, looking to duke it out in the final circle and take advantage of enemies engaged in gunfights.

Where do most players stand on Ranked?

A quick look at the data from Split 2 of Season 14, provided by Apex Legends Status, paints an interesting picture.
The RP system in Apex Legends Ranked is quite simple to understand at a surface level. Note that the last time the Ranked system was overhauled, it was Season 13, and the developers launched Season 15 without an update to Ranked.