Getting Top 4s while others are topping the game? What are they cooking? Find out in our Battlegrounds late game guide.

You have mastered leveling curves by now and consistently get Top 4. Yet you notice streamers turning games around and tallying up some wins, raking up those Top 2s, crying out in frustration at measly Top 3s. How are they doing it? It’s time to build up your Battlegrounds late game skills to anticipate the endgame showdown with this guide.

Hearthstone Battlegrounds Leveling Guide. Become the king of the Tavern

Ever wonder if you should level your tavern tier? Master every Battlegrounds Leveling Curve with this Guide and become king of the Tavern.

“The goal is to prepare for the endgame, by finalizing and/or scaling your comp and most importantly preparing for all opponents. Scout the lobby, and figure out who will likely be the strongest opponents, and how you can eventually beat them. Steer your board to match up better into them, and buy good tech pieces if you find them (holding them in hand). “

Battlegrounds late game advice from BGCurveSheet guide
As per the quote, a comfy late game position in Top 5 allows you to scout your opponents. Now you have an idea what you’re up against. For example, 6 Beasts suggest a Baron Rivendare-reliant comp. Mechs equal Divine Shields with potential Baron / Kangor’s Apprentice shenanigans, while 4-6 Pirates indicate a potential Pirate ‘exodia’ comp. This knowledge will allow you to shift from scaling your board only to get outnumbered or scammed to specifically neutralizing their key pieces. In a word, techs — cards who serve the sole purpose of countering a certain opposite minion, mechanic or strategy. First, let's take a look at what needs teching against before you delve into late game solutions. 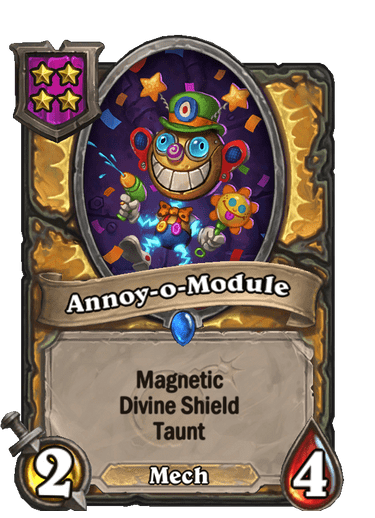 Leeroy the Reckless is great against Divine Shielded threats in the Battlegrounds late game
Image via Blizzard
Leeroy the Reckless is a great incarnation of the gung ho Leeroy Jenkins meme. A must-have in late game when Mechs, Mantids or simply large minions are allowed to roam freely, pre-tech phase. Granting it Reborn through quests and hero powers wrecks even more havoc. Vanilla Leeroy unfortunately gets countered pretty easily, as you will find in the next paragraphs. At least it trumps the next card:

Mantid Queen is a Battlegrounds late game powerhouse when it gains Divine Shield and Windfury
Image via Blizzard
Mantid Queen can round out any BG composition. A Poisonous body that can reliably gain Divine Shield in most setups after you use Vigilant Stoneborn or Sparring Partner to permanently Taunt it. It can even guarantee Divine Shield + Windfury when accompanied by three tribes and the permanent Taunt buff already applied. Mantid Queens are imperative against a big Elemental taunt or fat Murlocs without Shields.

Selfless Hero can Shield large threats in the Battlegrounds late game
Image via Blizzard
Selfless Hero is ol’ reliable, the poor man’s tech. Replaces that weak minion, buffer slot or Brann with a Divine Shield on a (tiny) stick. Its frailty turns out to be its strength, because it can act as a Shield-breaker, Cleave protector or soft-counter the next tech:

Tunnel Blaster counters Divine Shields in the Battlegrounds late game
Image via Blizzard
Tunnel Blaster is the staple when countering Divine Shields. Its previous incarnation, Unstable Ghoul, did just that by firing 1 damage. However, Tunnel Blaster’s 3 damage allows for additional uses. Its deathrattle can nullify an unbuffed Leeroy. It can also kill a “virgin” Chad (an unbuffed Khadgar), halving any Reborn Leeroy shenanigans. It can be soft-countered by Selfless Hero, which dies to it, giving a Divine Shield after the Tunnel Blaster’s explosion. So pair the Blaster with a Baron Rivendare to double the explosion, accordingly. This double damage can also wreck a basic Kangor’s Apprentice, hopefully before any Mech dies. 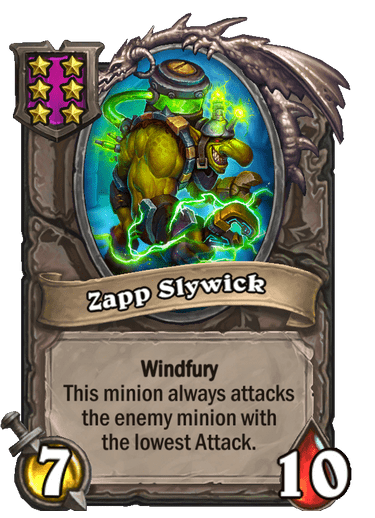 Zapp Slywick can snipe key pieces in the Battlegrounds
Image via Blizzard
Zapp Slywick’s heard his archnemesis being mentioned in the previous paragraphs and is here to help. This is the original tech card, as its 7 attack can reach out of nowhere to nullify that protected Baron Rivendare’s 7 health right off its high horse. “Who are you calling short?”.

Uther the Lightbringer can help protect key pieces in the Battlegrounds late game
Image via Blizzard
Uther the Lightbringer is the anti-tech tech! This is the Tier 6 card you don’t really want to discover when you’re seeking late game direction, but otherwise excels in the endgame. Its ~15/15 gifted stats can help you solidify key pieces like Khadgar, Baron or Kangor’s to resist other techs. Thus it holds a bittersweet friendship with Zapp — buff him to 15 first or watch him perish to its buffed enemies.

Voidlord in the late game

Voidlord can counter several Battlegrounds late game strategies
Image via Blizzard
Voidlord is the underrated Battlegrounds endgame tech. Not as frequent as the others, definitely not as flashy, but can be decisive if used right. This Russian doll of Taunts can help shave off multiple Divine Shields. It can also stop the snowball rolling in the Pirate exodia, its tiny bodies letting the Scallywag or its tokens live and preventing others from spawning. Voidlord’s tech potential has been recently highlighted by latest Lobby Legends champion PenguinSan. Standard players win with Daddy D, BG players win with Void Daddy. Daddies everywhere!

APAC proves once more the region is built differently and takes home the last Battlegrounds Lobby Legends tournament for 2022.

Interrogator Whitemane can help snipe key threats in the Battlegrounds late game
Image via Blizzard
Interrogator Whitemane is the female Tier 5 version of cards you need late game but not mid game. The Taunt + double damage combo can blindside key pieces e.g. Baron, Chad, Kangor’s, unless the opponent gets creative with positioning. Opening with a large Cleave and placing your Whitemane in the sixth minion slot can help obliterate the opponent’s last three minions in ‘one fell swoop’. A Shakespearean tragedy!

And indeed, streamers and prominent players have not been quite keen on this Battlegrounds late game changer.

“Determining where your opponents' first hits go in a game where attacks are otherwise random is a crucial aspect in skill expression and control.

Whitemane ruins this completely: any board that's not a random collection of piles of stats loses a huge amount of control once Whitemane comes into play; at best it turns everything into a guessing game, where one player randomly shuffles their minions around in the last few slots, and the other randomly shuffles their Whitemane around hoping it instantly wins the fight if it taunts the crucial minion. At worst it invalidates entire combats; taunting the right enemy minion can turn close fights into 100/0/0, make all other tech choices and positioning irrelevant.

And that's not even touching on how this can make streams much more unfun; how many larger streamers will now rightfully become constantly paranoid, because one snipe with a Whitemane can ruin their games? How fun to watch is that?”

Despite this balanced tech meta, times change and the BG minion pool is as unstable as our old friend, Unstable Ghoul. It’s important to stay up to date with the Battlegrounds meta, late game or otherwise. Hence, following curated and up to date sources is mandatory. MinderRoots, Jkirek_, and Sleepy, from the Competitive Battlegrounds Discord server, are the masterminds behind the Battlegrounds CurveSheet. Following them and their cheatsheet is greatly encouraged, as they are constantly ahead of the curve - leveling or otherwise.
For overall Hearthstone content, stay tuned to Esports.gg. Whether you press the ‘end game’ button more than you should or reach endgame phases, we’re constantly producing Hearthstone content, news and updates for all calibers of players.

Stefan Stoican
Contributor | Twitter @NewTunesLaws
Stefan Stoican’s a former music journalist turned to the dark side of esports. When he’s not roping in Hearthstone, you can find him teaching or working towards a tour guide licence. #1 FPL Captain jinxer!